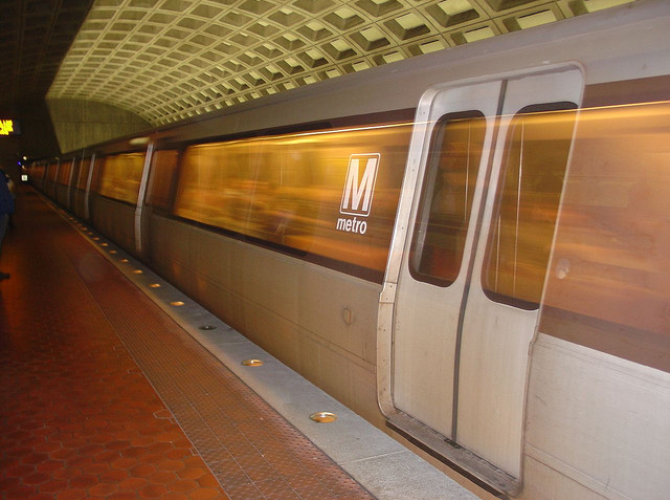 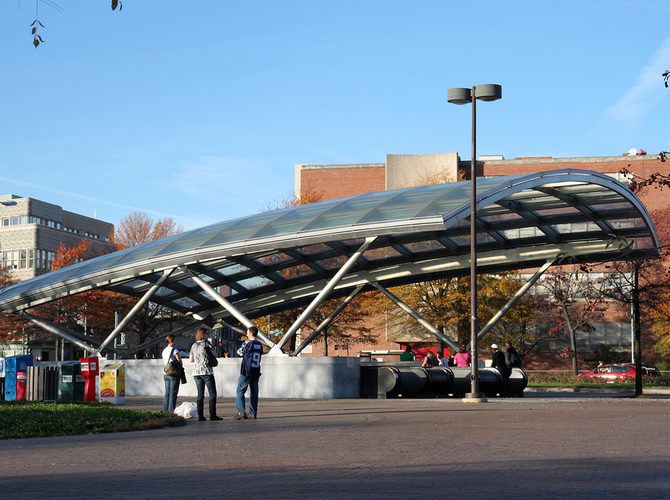 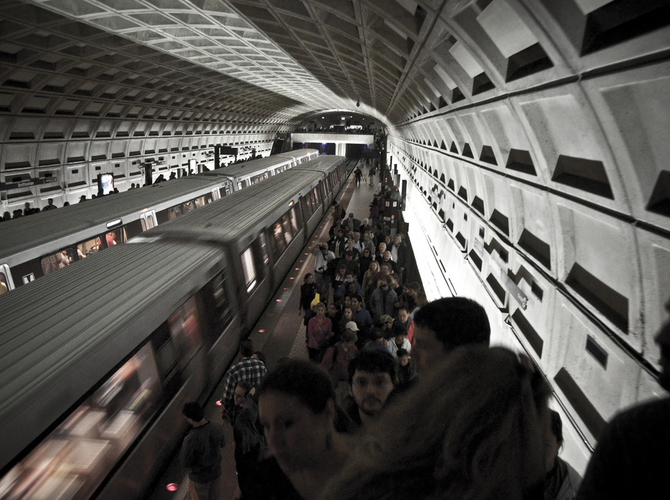 Knowing when to ride can keep you away from crowds like this. (Photo by Mr/Smith (CC BY 2.0)) 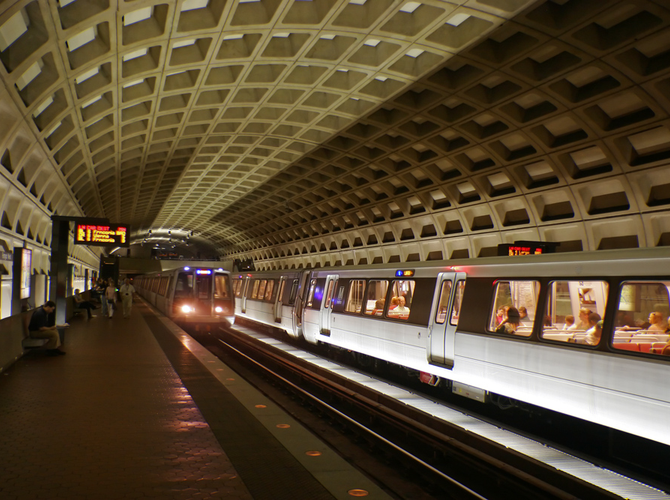 A Metrorail station platform (photo by Enzo Figueres (CC BY 2.0)) 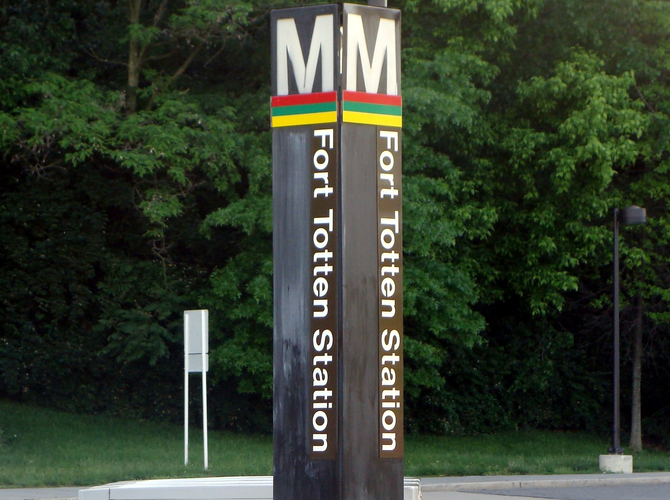 Large pylons mark each of the entrances to stations. They are readily visible, printed with a large Metro 'M', and the name of the station printed along the pylon side. Colored stripes painted around the top of the sign indicate the lines which service the station. (Photo by Niagara (CC BY 3.0)) 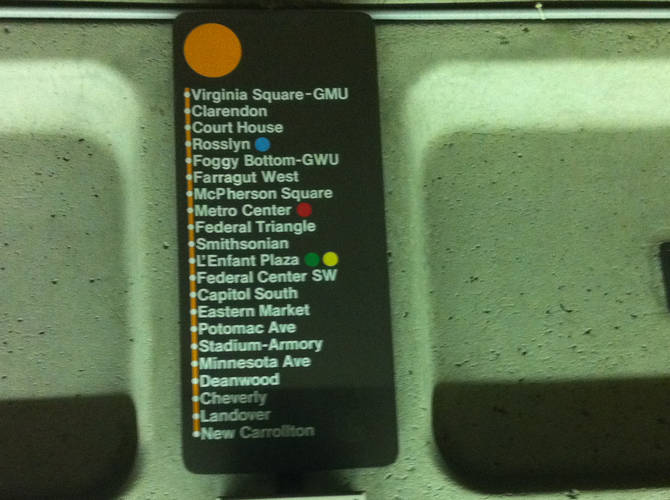 Train routes for each platform in the DC Metro are listed on signs like the one pictured here. (Photo by Alex Franz) 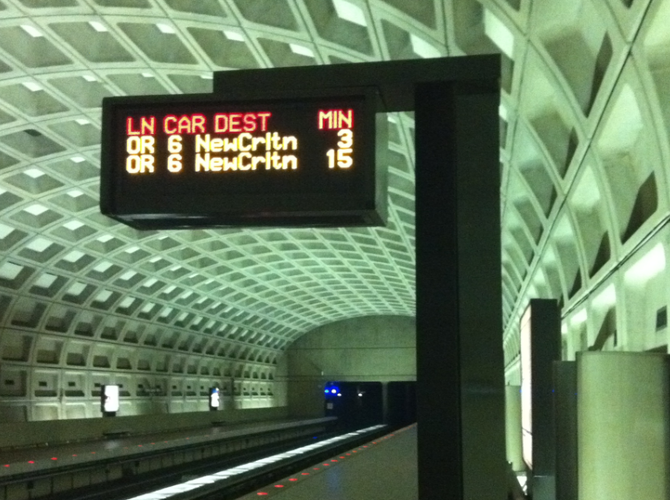 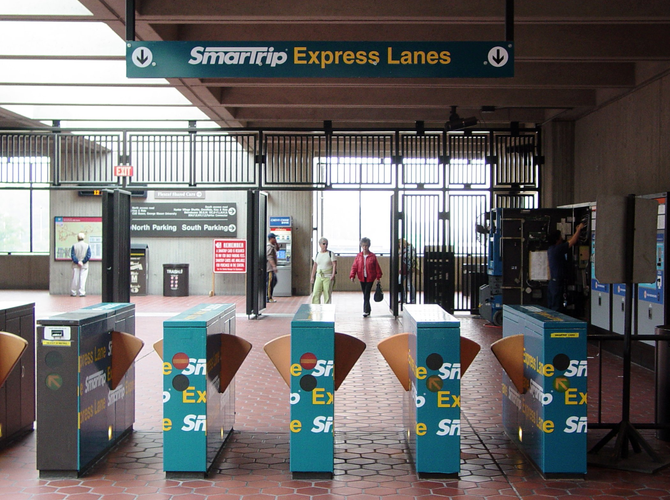 Station gates require a Farecard or SmarTrip card to pass through. Lights on each gate indicate whether the entrance is operating as an entry or exit, with a green light in the direction of travel. (photo by Ben Schumin (CC BY-SA 2.5))

Washington DC's Metro system is a great way to get to hundreds of popular locations and attractions in and around Washington DC. Metro's six lines and 91 stations are located in Washington DC and neighboring Virginia and Maryland. With over 700,000 trips every weekday, the rail system provides easy access to popular attractions including the National Mall, National Zoo, White House, Washington Nationals Park, and much more. The system also provides access to other area transit options, including a station at Ronald Reagan Washington National Airport and Union Station (with Amtrak, MARC, and VRE train service), and MetroBus express routes to to Dulles International Airport and Baltimore Washington International Airport.

If you’re visiting the Nation’s Capital, chances are pretty good that you’re looking forward to take it all on. See our list of the top 10 metro stations you need to know to visit the area's most popular attractions.

The first step to planning your trip is the DC Metro Map. Find the stations near your destination and learn about the Metro System on DC Transit Guide's Metro Map.

Explore Metro's six lines, and plan your route. Select individual stations to view live next train predictions, learn about nearby attractions, and see parking details for each station.

Check out these 10 tips that everybody should know before they get to the nation's capitol and onto the DC Metro.

A collection of some of the most common questions about riding and navigating the DC Metrorail system.

Live DC Metro Map and Train Locator - If you've spent some time using the DC Metro, you know the frustration of arriving at your station just seconds after a train has left, only to find that the next arrival is more that a quarter of an hour away. With the Live DC Metro Map and Train Locator, you will never have this problem again. See the approximate location of each train on a DC Metro map in real time, and plan your trip accordingly before leaving your desk, office, or home.
blog comments powered by Disqus